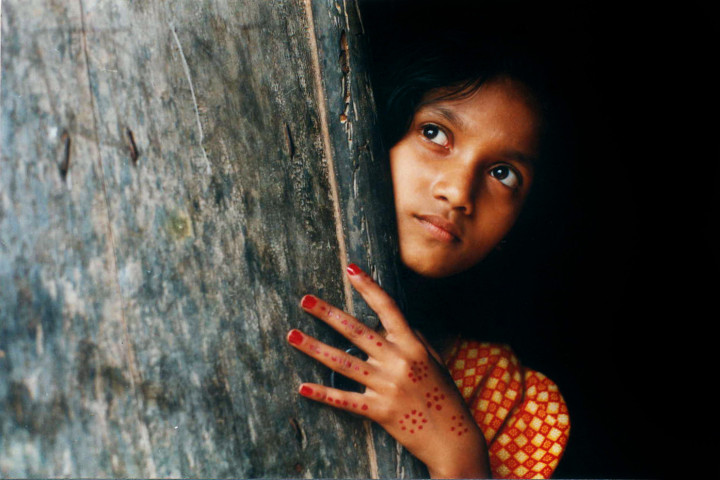 “Childhood should be carefree, playing in the sun; not living a NIGHTMARE in the darkness of the soul. – Dave Pelzer

Childhood – the most beautiful phase of life; when you can truly be yourself in your infinite innocence. A time when you have absolutely no responsibilities, no decisions to make and the words tension and stress haven’t yet made it to your vocabulary. It is indeed a time we always cherish and would beg, any day, to have a chance to relive it. But even though memories of our childhood are worth reminiscing, sadly, there are millions of children around the world, who do not enjoy the kind of childhood that we did. Thrown into a pit full of never ending misery, their childhood is forcefully buried deep down into the darkness of a life that they do not deserve. This, my friends, is the terrifying pit of Child Marriage.

Every year, 15 million girls around the world, are forced into marriage before their 18th birthday and some as young as 6-8 years of age. That’s 28 girls every minute. With Bangladesh, India, Nepal and Africa being the world’s hotspots for child marriage, these rising numbers are in fact the root cause of today’s leading social issues like poverty, gender inequality and crimes against women.

Child marriage is commonly found in areas that are rural or literacy deprived. More often than not, girls are pulled out of schools and thrown into a forced marriage with a male, who in many cases, is far older than the girl…sometimes twice her age. This kind of cruelty only leads to serious physical and mental health related issues such as domestic violence, forced sexual activity, early pregnancy and maternal as well as infant mortality, mental trauma, sexually transmitted diseases such as AIDS and even suicidal tendencies. This kind of stuff is a lot for such girls to handle and you’d be horrified to know that in countries such as Afghanistan, child brides have been reported to set themselves on fire in a hope to end their never-ending misery and pain. It’s sad as to how these child brides preferred death over the lives that they were living.

Pic Courtesy: National Geographic; Tahani, a child bride from Yemen, poses with husband Majed, who is 20 years older than she is.

”Whenever I saw him, I hid. I hated to see him,” says Tahani, a child bride married at the age of 6, who recalls of the early days of her marriage to his husband Majed who was 25 at the time of the marriage. The young bride posed for this photograph with her classmate, another child bride. Nearly half of all women in Yemen are married before they even hit puberty.

You might think that child marriage occurs in a few handful countries, but prevailing in more than 50 countries today, it is hard to imagine the hell that these girls go through every single day of their married lives. 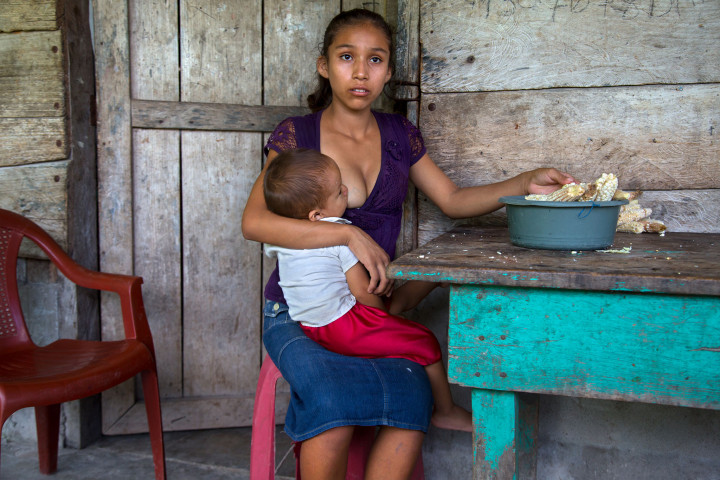 According to a 2012 UN survey, almost 30% of Guatemalan woman between the ages of 20 to 24 were married before the legal age. Teen mothers are so common in the country that there’s even a law that makes a C-section compulsory for mothers under the age of 14, because their hips are too narrow to give birth. And just like Aracely, there are millions of girls going through the same fate and suffering of having to bear a child at such premature ages.

Child marriage is a growing concern that needs to be curbed and if not done in time then we would be looking at an estimated 1.2 billion child brides by the year 2050. That is around 20% of the world’s female population in grave suffering.

“Each time he wanted to make love to me, he would beat me. He wouldn’t allow me to leave the house. I felt so depressed that I tried to take my own life.” says Lamana, another child bride from Cameroon, Africa, who was married at the age of 12.

Parents who marry their daughters way too young, believe that they’re doing best for them. But as soon as they realize the sad consequences of their decision, they are but forced to ask their girls to continue living that hellish life just out of the fear of what society would think about their family. So, in addition to going through all the suffering, the girls are forced to stay in their nightmarish marriages, just to accommodate with the societal norms. 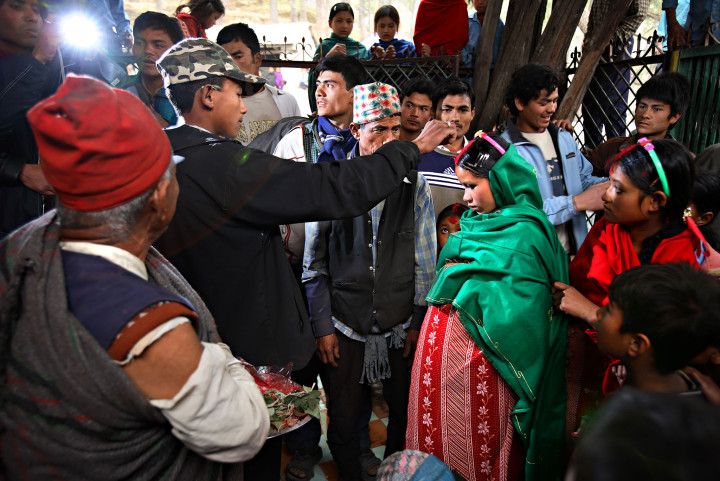 Pic Courtesy: National Geographic; Durga Bahadur Balami, 17, puts vermillion on the head of nine-months-pregnant Niruta Bahadur Balami, 14, as they officially become man and wife in Kagati village, Kathmandu Valley, Nepal, 2007. Niruta moved in with Durga’s family and became pregnant when they were only engaged. In some circles of the more socially open Newar people, this is permissible.

Child marriage violates a child’s right to protection. It robs them of their childhood, their innocence and their dreams of a brighter future. Today, 700 million girls, are victims of child marriage. And in countries like India, even after 68 years of Independence from the British rule, it is shocking to know that a country so far ahead in every modern aspect there is today, is so far behind in tackling serious issues such as crimes against women. Around 39000 children alone, are married every day in India.

So, the question stands tall: why are the numbers so huge? And although there is a strict law against child marriages in many countries, why is it still a major social concern? You cannot entirely blame the law for it, because those who are actual participants in the crime are close enough to those who see it happen and do nothing about it. 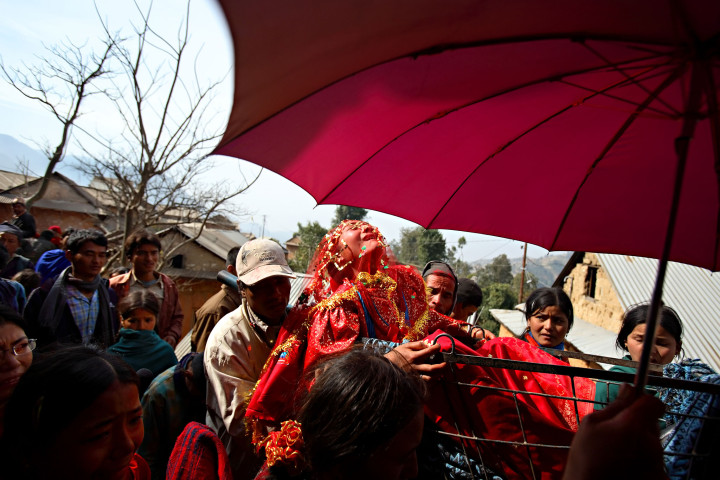 No one can quite understand what these girls suffer through at such a young age. Only those who go through such an ordeal can truly narrate their stories, and they are heart breaking. The repercussions of child marriage as narrated by these girls can be classified into three major types:

Premature Pregnancy and its Complications

The prime consequence of child marriage is the fact that young girls are not educated about protection and early pregnancy. As a result, many of these girls die during childbirth and some experience severe complications during and after pregnancy. Infants born to mothers under the age of 18 are more likely to die in their first year. If they do survive, they are more likely to suffer from low birth weight, malnutrition, and late physical and cognitive development.

Another major consequence of child marriage is violence: both physical and mental. Young girls in a child marriage are more likely to experience domestic violence in their marriages as opposed to older women. A study showed that girls married before 18 years of age are twice as likely to be beaten, slapped, threatened or sexually exploited by their husbands. Not only are they victims of violence by their husbands, but the in–laws also have a role to play in torturing young brides especially for dowry. Such girls often show symptoms of sexual abuse and post-traumatic stress. As a result, there are burnt and beaten up brides arriving every day into hospitals. They either succumb to their injuries or live a life of hell – helpless and savaged.

Child marriage perpetuates the cycle of poverty. Married girls are often forced to leave schools and thus lack skills that can help uplift their families from poverty. And given the consequential health concerns associated with early marriage, the risks of diseases and malnutrition amps up all the more. Undernourished mom equals malnourished children and poor nutrition undermines proper body growth which eventually leads to poor heath and inefficient working members in a family, thus leading to poverty. 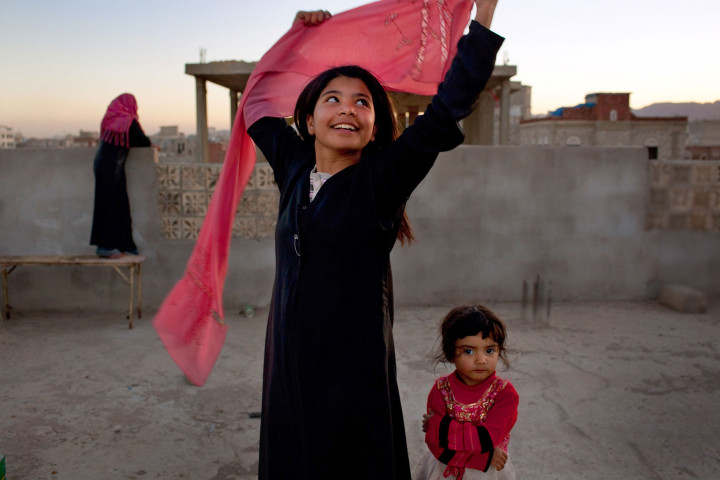 Pic Courtesy: National Geographic; Nujoud Ali rejoices after receiving a divorce from her husband, who was 20 years older than her at the time of their marriage. She was just eight. Nujoud’s story sent shock waves around Yemen and caused parliament to consider a bill writing a minimum marriage age into law.

We say we live in the new age where girls are regarded as equals to their male counterparts. But even though we live in this “self-concocted” world of equality and peace, we cannot deny the fact that the numbers of girls getting married in their childhood are increasing day by day. Brides who are been abused do not seem to diminish and sexual violence against women has just become a routine everyday news that you either read or watch on television and ignore it, cursing the Government for lenient laws.

Believe me, it is not the Governing body who is to be held responsible every time, it is the animal within us which releases without notice and engages into such heinous crimes – either as a criminal or as a spectator to the crime. No amount of law can put an end to such social evils, if we do not stand up to the crimes against women and fight back – not only for the sake of those poor girls but for the sake of a better world.

All girls have a right to quality education and deserve learning in a safe and supportive environment…one that does not reinforce gender stereotypes and is relevant to their needs, aspirations, thus promoting gender equality and human rights.

A safe environment gives them the chance to reach their full potential and to assert their autonomy, helping them to make free and informed decisions about their life, including whether, when and who to marry, along with decisions affecting their sexual and reproductive health. Let us empower them with the power of decision-making and a chance to play an active role in their community by breaking intergenerational cycles of poverty, insecurity and ill health.

Support the cause by sharing this article using the hashtag #ChildNotBride

Sumbmit your story to [email protected]